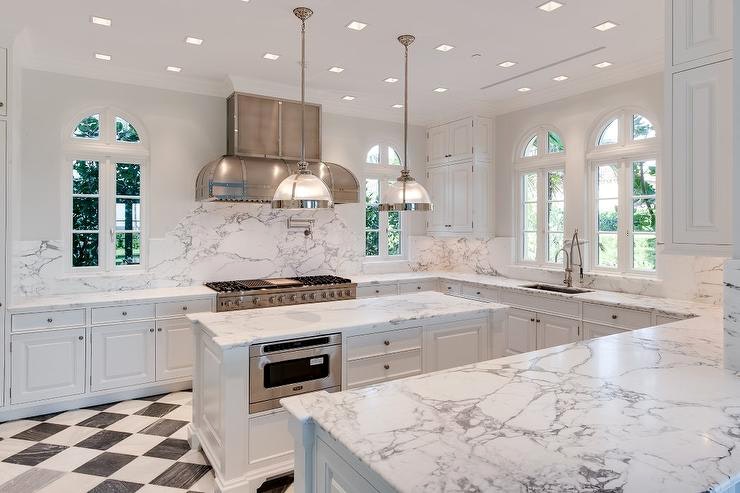 If you are in the process of redesigning your kitchen, which many people have been doing recently because of lockdown and the fact that they are spending more time at home, one of the major considerations is the worktops.

In any kitchen, the worktops and the floor attract the eye the most, because there is a lot of them and they take up a lot of space, and they are horizontal instead of vertical.

So, it follows that your choice of worktops can almost make or break your kitchen. Today, many people are opting for marble worktops in Romford, and in many other parts of the Home Counties as well, because of the amazing luminescence that they have. Certainly, there are other stone worktops that are beautiful, but none quite compares with the look of marble. You might think that as our name is Marble & Granite, we would be bound to say that, and to some extent that is true. You could say that we are somewhat biased, but then again it is not just us who think that way. Marble is just a wonderful stone.

As a natural stone, not only does marble stand out from the others, but it is also available in a never-ending choice of different colours and patterns. Certainly, when many people think of marble they think of white, and it is the case that there is a lot of white marble around. But in much the same way that all potatoes are not white (in fact, no potatoes are true white) marble comes in a huge range of colours and patterns, every slab of which is different. No two slabs can ever be identical just as no two people can ever be identical. Even identical twins have variations.

This is because marble is derived from limestone which has formed on the sea-bed and on beaches, and limestone itself is created from the shells of many different shellfish that have broken down over the years. The process has taken millenia, but in many cases also includes clays that have become mixed in with the limestone as it has transformed into marble in the earth’s crust under extreme pressure and heat. This is what provides the incredible amount of different veining in marble.

The colours are almost limitless, despite everyone thinking that marble is white. You can get it in greens, browns, reds, silver, gold, grey, and more.

When choosing marble for your kitchen worktops you have many possibilities. Not only the colours, but the veining and how you match it or mirror it. Every quarry is different but with some types of marble it is possible to cut the slabs in two ways to achieve different veining patterns. Vein cut, or striato, cuts the slab so that the veins have a striped linear appearance, while cross cut – or fleuri cut – cuts the slab the other way and results in an open “flowered” pattern.

When choosing marble slabs for a longer worktop it is necessary to consider how they will come together and give the final appearance. There is an art to selecting the slabs and understanding how the veining will match.

There are all sorts of things that you can do with the edges of your marble worktops as well. There are plenty of different profiles that we can produce on marble worktop edges using our computer controlled milling machines. Something as simple as a bull nose which is curved can also help to avoid damage. If you drop something heavy, such as a cast iron pan, on a rectangular edge it is going to chip, whereas if it is curved it is unlikely that it will do so.

While marble is a fantastic choice for a kitchen worktop, you do need to treat it with respect. It is a softer stone than others, and as such some marbles are susceptible to staining if you spill acids such as vinegars, lemon juice, and so on, or things such as coffee or red wine. For this reason, all marble worktops need to be sealed using a quality sealer. Even so, you need to mop up any spills immediately. Equally, you must not place hot pans directly on it, and certainly not chop foods on it.

Take care of your marble worktops and they will repay you with a lifetime of service and beauty.

When It Comes To Worktops, There Are Multiple Choices