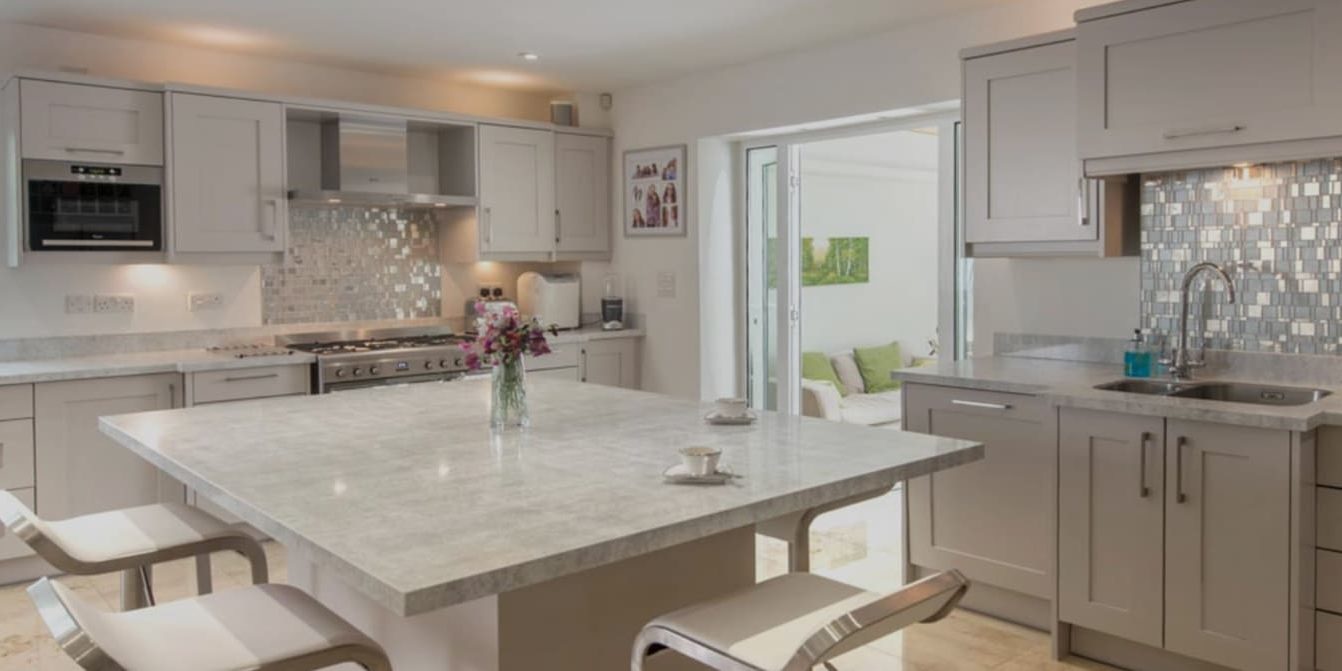 At Marble & Granite, we are renowned for our stone worktops and vanity and bath surrounds because it is our speciality. We don’t just supply marble and granite worktops: we also make them from quartzite and limestone, which are two other natural stones, as well as quartz and sintered stone which are man-made, mainly from natural materials.

Of course, as you might expect, most of our customers ask the question “What is the best stone for my worktop?” and the answer is that there isn’t a “best”, as they all have different features. What we can do is to explain all of them to you so that you can make the decision as to which is the best for you as an individual.

In particular, we get asked about the differences between Granite worktops and Quartz worktops. Granite is a natural stone and quartz worktops are man-made, using quartz which is natural but with added resins and pigments. Quartz worktops are actually usually around 93% quartz but have undergone a process so that they cannot be called “natural”, whereas granite is hewn straight from the ground and trimmed and polished so that it is still 100% natural.

Natural granite is an intrusive igneous rock with large grains, which are a number of minerals that can easily be seen by the naked eye. Intrusive rock is one which was molten rock that cooled inside the earth’s crust and was never expelled as molten rock via a volcano, for example.

The gradual cooling of molten rock allows large crystals of minerals to form within the rock and over time there is a differential solidifying of the various minerals which are in the rock, depending upon the overall chemical makeup. So different minerals solidify at different times and this will define the final appearance and constitution of the rock. The size of the individual grains within the rock will correspond to the rate at which the molten rock was cooled. Igneous rock is one which has solidified from molten rock in contrast to two other types of rock which are sedimentary and metamorphic.

Granite is a mix of different materials which are mainly quartz, potassium feldspar, and micas. It can be anything from 20% – 60% quartz, 10% – 65% feldspar, and 5 – 15% micas. In addition, there may be amphiboles and other trace minerals. The enormous variations of colour seen in granite are the result of different combinations of minerals. The combination of the following minerals are responsible for the different colours and are the ones mainly seen in granite. A high proportion of the minerals will result in the following colours:

Similarly, you may see green granite advertised, but this is unlikely to be granite and is often a green variety of marble. It could also be a green variation of soapstone.

If you are thinking of having granite worktops in Mayfair, or for that matter elsewhere, know that it is a very hard rock, coming in at 6 – 7 on the Mohs scale of hardness. However, that does not mean that it is totally non-porous. Some types of granite also have very fine cracks in them which is a result of stresses as the stone was formed. Things such as cooking oil, lemon juice, wine, vinegar, fruit juices, and so on, can seep into these fissures causing a stain which is difficult to remove. Therefore, it is necessary to seal granite with an appropriate sealer. Top-quality sealers have quite a long life and can last for several years. To test if the sealer is wearing, place a small drop of water on the surface of the worktop: if it soaks in, another coat is needed.

Quartz is an extremely hard mineral and quartz worktops are comprised of about 93% natural quartz with added resins and pigment. Engineered quartz worktops are available in a wide range of different colours which are often a single colour all the way through, which is fine if that is what you prefer compared with the huge variations in natural stone.

Quartz worktops in Greenwich are extremely hard-wearing and totally non-porous, so they have no need to be sealed. They are not likely to get scratched, but you still shouldn’t cut or chop foods directly on them: always use a chopping board. You should also avoid dropping heavy pans on to them. In addition, you should not place hot pans on them directly from the stove or oven because they contain resins, and this could damage the worktop. Place them on a trivet or heat-resistant silicone worktop protector.

Because they are non-porous, quartz worktops are totally resistant to the growth of bacteria and are therefore ideal for food preparation, with the exception of chopping and cutting.

Quartz worktops don’t require any form of maintenance except a wipe over with a damp cloth and a little washing-up liquid if needed. Once clean, rinse and dry with a tea towel or kitchen roll. However, you should note that if you opt for a honed finish rather than a polished one, these are more susceptible to spills of oil, lemon juice, vinegar, red wine, coffee, and so on, so they should be wiped off immediately and not left. In addition, don’t use any sort of abrasives such as a soap pad to clean quartz worktops. Repetitive use of such things may cause a polished quartz surface to dull, as can the use of oily soaps and waxes.

Granite Worktops In Romford: What You Need To Know

What You Need To Know About Granite Worktops